All Sorts of Things

Random posts on all sorts of things designed to inform and provoke. 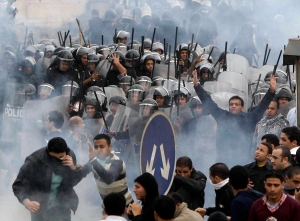 Every day brings new reports of how a resurgent Egyptian government – staffed by the country’s armed forces – is stomping on those who it deems to be an undesirable entity.

Everyone from reporters to aid workers to regular citizens find themselves to be a target and at the risk of being picked up in the middle of the day and whisked away to a vacation to an indeterminate location for an unspecified amount of time.

Fortunately, I don’t live in Egypt so I can only imagine the horror – and likely a small sense of justification – being felt by those who had warned about such excesses and, most likely, find themselves as the primary targets.

On the other hand, I cannot even imagine what must be going through the minds of those, presumed, liberals who had supported the military against the perceived unfair and un-Egyptian Morsi government.

One can only wonder what those people must be thinking as they watch women, journalists and aid workers being assaulted with no end in sight. I would guess some of them have borrowed their heads in the sand amid protestations that these actions are needed and only a short-term reaction to cleanse the country of the negative impacts of the democratically-elected Morsi government.

Externally, nations that supported the former government – composed of Iran and Syria, and, according to some Egyptians, the United States – find themselves impotent against the military’s actions. Setting the United States aside for now, Tehran and Damascus are fighting their own problems so have limited capacity to focus on Egypt.

Diplomatically, these nations could use the Egyptian military’s actions as a benchmark or guidepost of something that should be avoided and what could happen if non-democratic organizations are allowed to run free.

Conversely, countries that support the Egyptian military – composed of Saudi Arabia and, according to some Egyptians, the United States – must be both happy and slightly concerned with these developments.

Happy because their allies are now back in power and concerned because of the chances of a backlash against them continue to rise with each passing day.

For some insane reason, I suspect Saudi Arabia is not concerned about the backlash and, because of the US’ ineptitude in the region, the Egyptian military likely doesn’t care about an external backlash against its actions.

As for the US, we are both divided and muted – the latter probably due to Israel’s support for the Egyptian military.

The former is exemplified by the late December 2013 visit by US lawmakers – affiliated with the tea-party faction of the Republican Party – to Egypt during which these representative met with senior members of the post-coup Egyptian government including General Abdel Fatah al-Sissi and interim-President Adly Mansour.

At the end of the visit, three of these visitors released a video praising the country’s armed forces and supporting the crackdown against the Muslim Brotherhood. (The video included Representatives Michele Bachmann, Steve King and Louie Gohmert.)

Representative Bachmann stated that she would “stand strong in support of continuing military support” while King congratulated Egyptians on “standing up for freedom” and Gohmert asked everyone to enjoy this “good time.”

Thus, the military’s concerns about US reaction to their illegal actions are mollified by the seeming disagreements within the United States.

This means that there literally are no reasons for the military to stop its actions. It also makes sense for them to continue their current policy in order to destroy their enemies and handle any domestic blowback – which according to their plan will be limited since the people will be scared and those who aren’t going to be scared will be dead.

This means that if the military isn’t told to stop its actions or there isn’t a massive reaction, civil society in Egypt will revert back to its Mubarak days – except it will be even more oppressive.